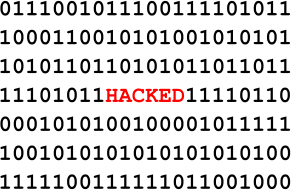 We received a call from a client where we support his home PC software earlier in the week. This client is visually impaired, and uses screen-reading software to speak out emails and webpages. He reported a rather disturbing message when he turned his PC on – his PC kept saying “Greetings on behalf of the Islamic state. The time of repentance is here”.

He turned his PC off straight away and gave us a call, as he found it quite disturbing to be receiving spoken messages from the Islamic State in his home!

On investigation, it turned out the provider of his screen-reading software, GW Micro, had been the subject of a hack attack in the name of Islamic State, and thousands of other blind users had also receive the same message whilst using their computers.

After a software update and malware check, all was good again, but it’s a somewhat chilling reminder that the world is now more connected than ever, and it’s important to take precautions with our PC, and personal, security.

If you need help reviewing your virus protection, make sure to give us a call.